In and out of the box

Who is Luce? Who is this gifted, high-school boy with his great smile and athletic body. Luce (Kelvin Harrison jr) was taken from Eritrea as a child and adopted by Amy (Naomi Watts) and Peter Edgar (Tim Roth). In a speech at his school in Northern Virginia Luce chuckles when telling the audience that his white mother could not pronounce his name, so ‘my father suggested they rename me’.  The audience, both on the screen and in the cinema, burst out laughing when he says that he did not understand his name at first. Luce? It sounds like ‘loose’, he smiles, baring his sparkling teeth. His real name remains unmentioned, probably no coincidence in a drama about identity.

Luce’s teacher, Ms Wilson (Octavia Spencer) is suspicious of this charming boy, though, and she questions his motives for writing an essay on the revolutionary psychiatrist Frantz Fanon, who supported violence as a means to stop colonization. She decides to search his locker, finds some illegal fireworks, and consults with Luce’s parents, which makes us all struggle with what to think and who to believe.

What is going on between black boy Luce and his black teacher Ms Wilson, who appear to think differently about their position in America and how they might be seen. What about the other black boy who is denied a scholarship? In a conversation, published in Drama Movies (Entertainment Scene, Filmmakers, Sundance, 24 January 2019), co-director and co-writer Julius Onah explains: ‘I knew from my own experience, having gone to Washington – Lee High School (recently renamed Washington Liberty) in the middle of Arlington, that it was a melting pot inside of a melting pot, even though it’s predominantly white. Arlington was also interesting because, like many places, it has progressive ideals that run up against internalized prejudices that people either aren’t aware of or refuse to acknowledge.’ He goes on to explain that the reference to ‘black black’ in the movie stems from his own experience at school, where some black people were accepted by whites and others, the ‘blacker’ ones, were not.

Strange, disconcerting things start to happen as the movie goes on, both to Ms Wilson as to Rosemary, her sister (Marsha Stephanie Blake). The strong suggestion that Luce, who appears to have so many different faces, is somehow involved in all this causes uneasiness. Is this black paragon of virtue really such an emblem of an integrated immigrant? Can his white, suburban parents handle him? How do they cope with their own convictions, but also growing fears about their model son? They desperately cling, not only to their own ideas of Luce’s character, but also to those of their own parenthood. They have taken such efforts, paid for years of therapy after Luce’s childhood in Eritrea and he has been doing so well.  Their idealism, goodness, even identities seem to crack. Especially Amy is prepared to do a lot to preserve her own notion of who she is and what she thinks she believes in. 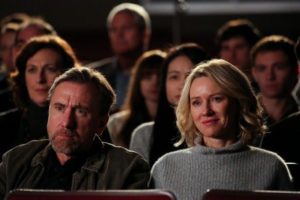 Julius Onah (in the above mentioned conversation, published in Drama Movies) says: ‘I knew a lot of people like Amy and Peter in Arlington. People who are educated, smart, privileged and profess certain ‘liberal’ values. What I found interesting about the story was what happens when people who look good on paper discover tension between the values they profess and having to actually live those values.’

The atmosphere in the film gets more grim, also because of Luce’s Chinese- looking girlfriend Stephanie (Andrea Bang), who – like Luce – is fighting to escape the ‘box’, full of demands, they feel they are in.

The characters get more complex and ambiguous. In this film about racism, power, privilege and identity, manipulation reigns. Not just on the screen. In the cinema questions about our own preconceived ideas and expectations stare us in the face, leaving us unsettled about Luce and about ourselves.

distributor: Searchers in the Netherlands