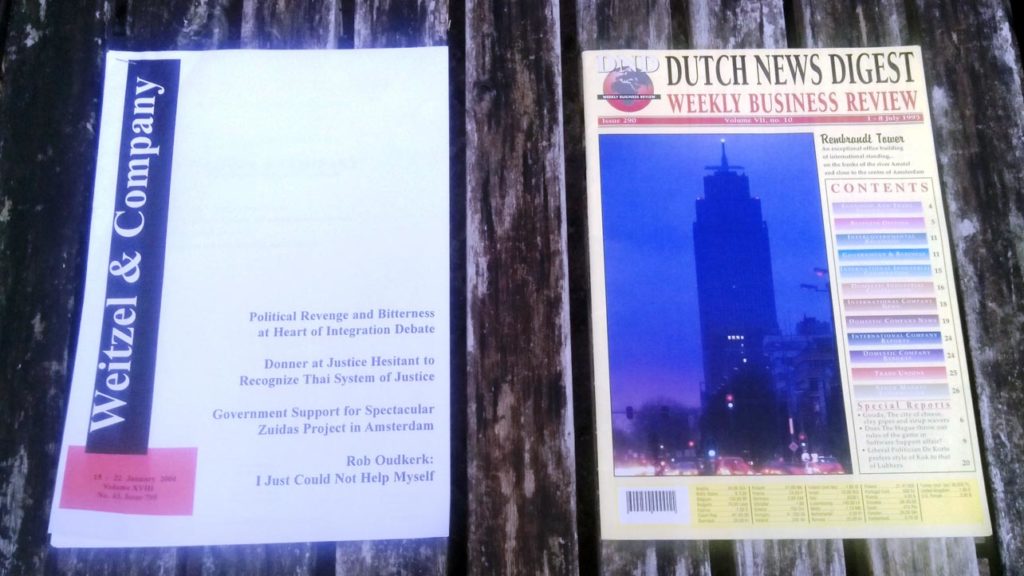 Professor Bart Tromp of Political Science at Leiden University and editor of the Yearbook for Democratic Socialism is a declared enemy of any change in the electoral system of the Netherlands which would in any way result in the direct election of mayors, the prime minister and both houses of Parliament, the Tweede Kamer (Lower Chamber) and the Senate.

He would prefer to keep the system as it is, but if is to be changed or renewed, the change must not affect the electoral system of proportional representation and the political party system which this electoral system sustains.

What Professor Tromp most fears is the election of someone, such as, for example, the late Pim Fortuyn, to public office who does not belong to one of the existing parties and whose election would, in effect bypass existing parties. The professor makes a distinction then between ‘representative democracy’ and ‘plebiscite democracy’. The clearest example of a plebiscite was the one in France in 1804, which made Napoleon emperor.

This is not an election in any sense of the word.  When holding a plebiscite, an issue is put to the people. They must decide yes or no. There is no need for political parties. The people in the referendum are not being asked to make a choice between this or that politician.  It is an instrument used by an existing ruler or government to confirm or reject a certain proposition, e.g. should Napoleon become emperor or not?

The reference, then, by Professor Tromp to ‘plebiscite democracy’ is an attempt to obfuscate the issue, and the issue is the answer to the question what is wrong with the existing political system in the Netherlands. The answer to this question is relatively simple. There are many who are shut out of politics by the existing political structure. One such case is the late Pim Fortuyn and his followers.

What is there about the existing political structure which shuts out participation in the Dutch democratic process? We are told that the ‘essential problem’, with reference to the last two elections for the Second Chamber, is that Democrats’66 failed to take an ‘ideological’ stand on the issues leading up to the election. This enabled the party to decide on the basis of the outcome of the election which combination coalition would be most beneficial for its constituency.

Bourdain’s Search for the Perfect Meal

In memory of the American celebrity chef Anthony Bourdain

The perfect meal. What is it? For our purposes, the word is ‘complete’.  A perfect meal lacks nothing, it is complete. On the other hand, any meal whatsoever is complete insofar as it satisfies our hunger. But we are not talking about any meal whatsoever. Perhaps if we journeyed to New York City to dine at Les Halles, the restaurant of executive chef Anthony Bourdain, we would experience the ‘perfect meal’ and our sophisticated demands for this ultimate of all meals would be met.

For his part, Tony Bourdain says in his most recent book, A Cook’s Tour (2001) ‘I wanted the perfect meal’ and ‘I wanted adventures’ in the style of Graham Greene and Kim Philby. He also says: ‘I wanted to see the world …I wanted the world to be just like the movies’.

The search, however, fails in this last respect, because unlike the characters in Greene’s novels or in the espionage of Philby, he is accompanied by a television crew in preparation for a cook programme once he returns from his worldly travels back in the United States. In his addition, there is no room in this adventure for the traditional love affair and its complex uncertainties given Nancy, his wife, is always in his mind if not with him on the food trail.

Bourdain, nevertheless, knows that the magic which must accompany the perfect meal will not be found if the meal cannot be remembered: ‘No one remembers their best meal ever as being consumed jacketed and tied in a standard dress shirt sitting bolt upright in a four-star restaurant’. What is remembered is the first taste, the first ‘sensory memory’, a simple taste such as a ‘single slab of sacred foie gras or a single wild strawberry’.

Why, for instance, is French food considered the best in the world? Bourdain’s simple answer is, ‘…because they use everthing’. This is also true, according to Bourdain, for the kitchens of Vietnam, Portugal, Mexico and Morocco. These kitchens, their environment and the people who inhabit them, will be the prime subjects of his search for the perfect meal.

This is not to say that meals in the Basque region of Spain, Japan, England and the United States, are not ‘fantastic’’ or ‘sensational’ or ‘best in the world’, it is just that meals here are generally of food that has been transformed or refined from what it was at the source.

Bourdain’s search for the perfect meal is given to us in the first person narrative. It is lively, pungent, politically incorrect and sometimes quite dramatic. He gives us a bird’s eye view of the location in the country visited as well as the people directly involved including their habits, wishes and memories. He is most interesting when providing an account of the purpose of the visit, the meal.

His visit to the farm of Bourdain’s co-chef Jose Meirelles in Portugal is a good case in point. Here, the scene is set by the predominate smell in the air, ‘wood and smoke’. The dinner revolves about the pig and the slaughter, which makes Bourdain squeamish. Every part of the pig is offered for consumption during the dinner, nothing is wasted. In this sense, the meal is complete. The agony of the slaughter, however, makes Bourdain realize there is more to the perfect meal than a sanitized design kitchen in New York: ‘I am more confirmed than ever in my love for pork, pork fat and cured port. And, I am less likely to waste it in future.’

His return to the beaches of the Gulf of Biscay in Southwest France is ostensibly to find the perfect food, the oyster, ends in disappointment not because of the oyster, but because he realizes his journey here was actually to find his departed father, and in this he failed. Bourdain grew up in this area of France.

Bourdain is at his best when talking about Ho Chi Minh City (Saigon) in Vietnam. This is also true for visits to locations in Cambodia, Mexico Scotland, Russia and Morocco. In the land of couscous, tajine and brochette, Morocco where the prevailing smell is oleander, and the ingredients garlic, cilantro, onion, mint, cumin, cinnamon, tomato, salt and pepper, the sometimes maverick chef finds the taste of testicles quite ‘sensational’.

Further exotic dishes at the simple taste level can be found during his stay in St. Petersburg where the ‘borscht was sensational’, in Morocco where the pigeon pie was wonderful’, in Cambodia where the durian fruit was ‘fantastic’, in Scotland where the haggis (seep guts and oatmeal) was ‘delicious’ and in Saigon where the taste of the live heart of a cobra was ‘not much of one’.

This contrast between transformed and refined cuisine in our restaurants, on the one hand, and simple food which is eaten in order to live, a need, is no more sharply put than in Bourdain’s comments on his visits to San Sebastian in the Basque country of Spain and to the restaurant the French Laundry of Thomas Keller in the Napa Valley wine country about Yountville, just northeast of San Francisco.

The Basque chef Juan Marie Arzuk offered Bourdain ‘one of the best meals [I] have ever had’, in that, ‘presentation represented the food to best effect and never distracted from the ingredients. The Basque elements were always front and center.’ The contrast with simple food is made again at the French Laundry where the meal consisted of twenty courses and took six-and-a -half hours. Keller, ‘a legendary perfectionist’, supplied Bourdain and his three friends, the chefs Scott Bryan of Veritas in New York and Eric Ripart of Le Bernardin in New York plus the co-author of Keller’s cookbook, Michael Ruhlman, with an ‘absolutely awe-inspiring meal’.

A Cook’s Tour is an immensely readable travelogue in the search for the perfect meal. Does Bourdain experience the perfect meal? As Keller himself said, according to Bourdain, ‘Perfect is something you never actually attain…It’s something you search for. Once you reach it, it’s not perfect. You’ve lost it. It’s gone.’ This is another way of saying that you are not aware of experiencing perfection, or completion, until it disappears. But isn’t it possible to know when you are in heaven when that is where you are?

A Cook’s Tour (274 pages) is published by CCCO, an imprint of HarperCollins Publishers, and can be obtained in the Netherlands at the several American Discount bookstores at discount prices.